A Lines Bros. (Canada) Ltd. memo dated June 8, 1965 gave information concerning the 'Assembly of Imported Products'.  It stated that, 'The warehouse extension, where the assembly of trains and Scalextric will be taking place, is nearing completion and the following is an outline of our basic procedures covering: Ordering, Assembly, Stock Control, of the various components and finished items.'  It makes reference to estimating quantities and specifications of the various standard and special sets contemplated and goes on to say that, 'Basically, for the season, "plan for" memos are being ... issued ... to order and line-up components and supplies'.
The memo continues, '... we are ready for assembly - this year, it should be some time in July ... memos will be issued to "make" or assemble sets, based on components received (from the UK), and demand or need for various types of sets, as the season progresses.' ' On trains, estimated quantities for our standard sets will be issued; specifications will be per the catalogue for Canadian Trains, to be available shortly. (Here, rolling stock and track packs have already been ordered, transformers and packaging supplies will have to be finalised.)'

As in the USA, sales of model railways in Canada tended to be seasonal.  About two-thirds of annual sales would reasonably be expected to be made between August and Christmas.  Normal practice would be that even though orders would be taken late spring or during the summer, the product is not necessarily available at the outset of accepting orders, especially for large retail chains.

In Canada anyway, one of the reasons orders are taken at those times is to allow both the retailer and the manufacturer ample time to prepare.  The benefit to the manufacturer is that it allows the required time for larger Christmas production runs, particularly of the Special Train Sets, and ensures that all orders can be satisfied while eliminating over production that might otherwise have taken place.

These "plan for" memos offer an insight into factory activity, decision making, planning, ordering and are very useful for dating operations.

The factory reference material is invaluable in corroborating any evidence, deduction or supposition in what has been a very difficult area to research. 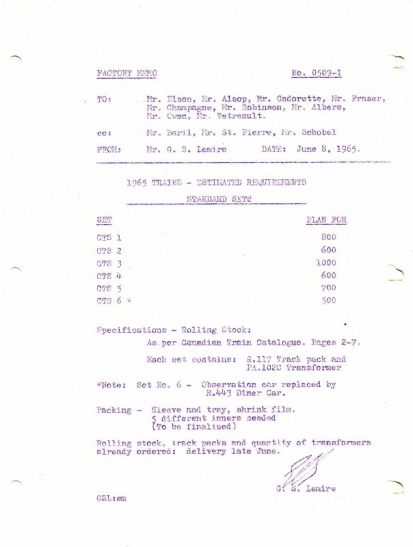 5 different inners needed. (To be finalised)

Of note, the memo states that 5 different inner trays would be needed but this was to be finalised; Sets CTS.2 and CTS.6, being both Diesel Passenger Sets, could share the same design inners if required.  However, in the end, separate Inner tray designs for each of the six sets were finally approved.

In 1966 the Standard Sets continued with the same 'CTS' numbering.
The 'CPS' prefix was dropped from the Presentation Sets and they were numbered as Set No.1 to 5 (or #1 to 5 - depending on which Tri-ang Railways publication you happen to be reading).
The Special 1966 Train Sets continued with the 'CTS' prefixes added to the three-digit number; again the first two digits '66' indicating the year of manufacture.
An 'R' suffix was also added to some sets (e.g. CTS.661R) the purpose of which is now believed to indicate that the set was intended for sale in retail stores only (and not for sale and distribution through the Home Shopping / Mail Order Catalogues issued by some large retail stores).

These sets continued to be available until approximately Autumn 1967 when new sets were introduced and the set numbering system was again altered, as it was done several times in the following six years.
Next Page