Set No. 9301 Diesel Switcher Freight Set - made for Simpsons and Simpsons-Sears retail stores 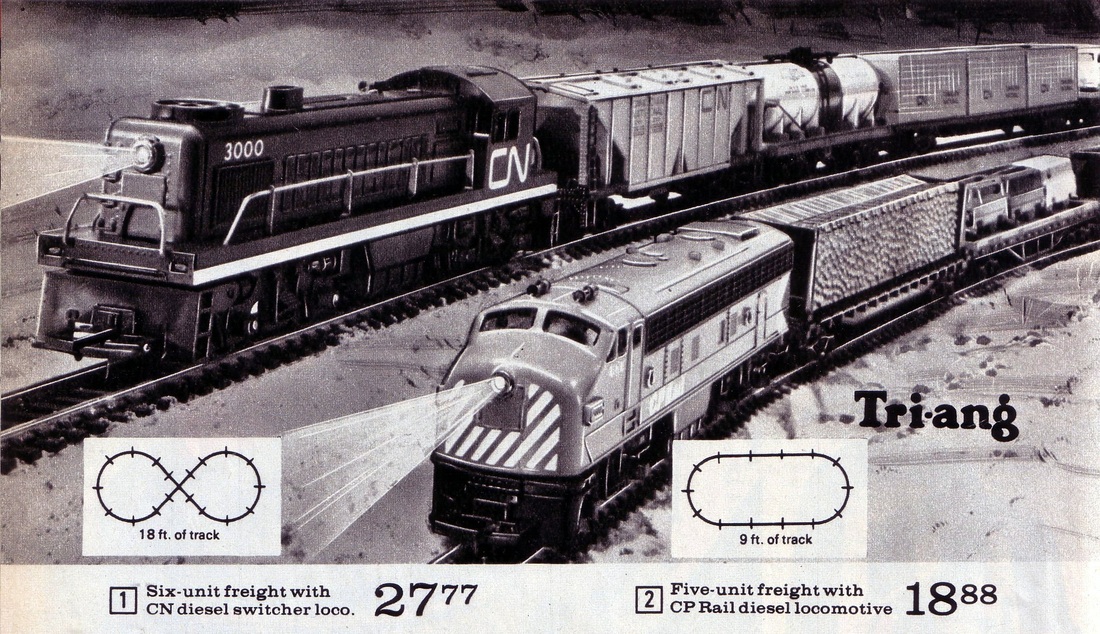 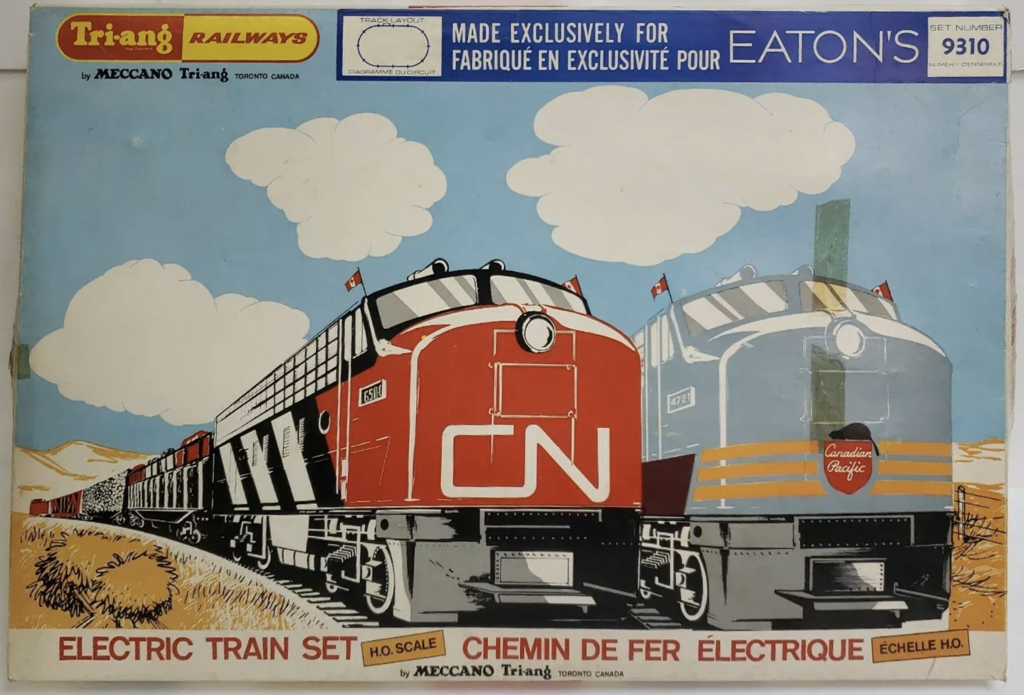 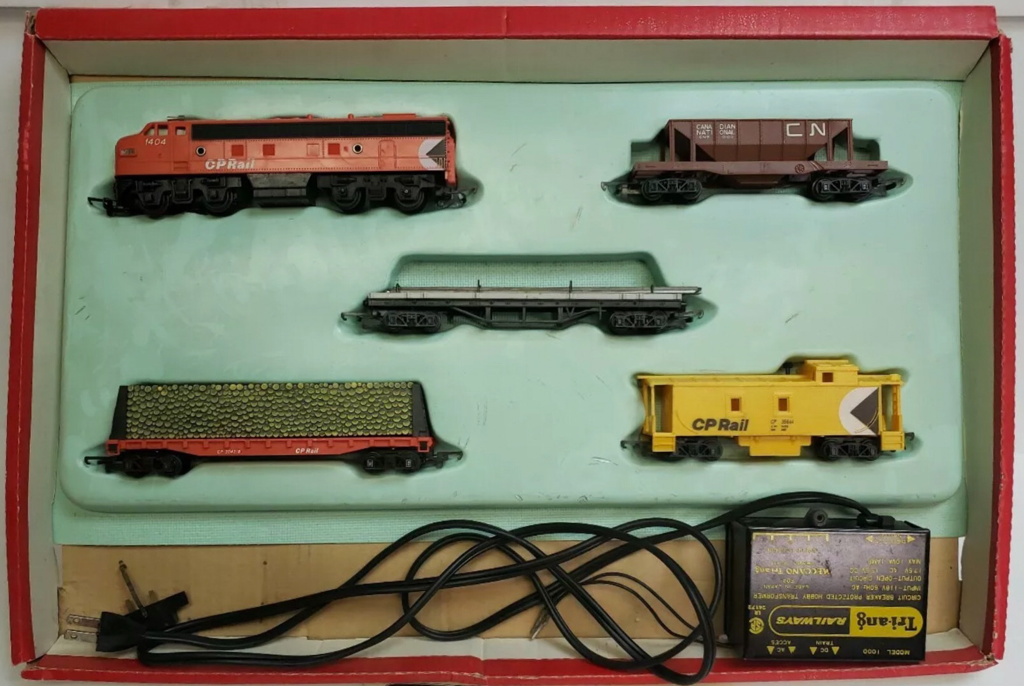 Additional Tri-ang System 6 Track could be purchased through the Eaton's 1971 Christmas Catalogue to extend the track formations supplied in Set No. 9310 and in Set No. 9311.
This forms a rather odd-looking slightly ovoid circle connected to an oval and joined by the two points.  One has to assume that the stocks of R.607 Double Curved Large Radius Track must have run very low at this point and whatever available suitable similar track was substituted in its place.

These are most unusual set boxes; the only ones that display the Tri-ang-Hornby logo which was adopted in Canada in 1971.
​They are cumbersome, fragile, very long and quite unique to these two very late issue sets.
My sincere thanks are owed to Peter Algra who contacted me with more information about what can now be confirmed as Set No. 933:

I received my first Tri-ang set in 1971 for Christmas, which started my passion for the hobby ...
Set number 933 was a Canadian National Freight Set and consisted of the following:
CN Diesel A-unit with number 4008 on side, CN yellow & orange Box Car; Shell yellow Oil Tanker and a CN Caboose.  The set also came with a System 6 oval of track and the black & gold lettered power pack number 1000 Transformer.  A copy of the 1971 Catalogue was also with the set.
... The reason why I know this is that, at the time, my father got me to write down the set number for future reference.

Later, Peter was able to confirm that the set box was identical to the set illustrated above and offered some further reminiscences:

​I remember it was a long box.  As soon as I saw the pictures you sent me, I immediately recognized the box.  My Set No. 933 definitely came in the box you have described.  In fact, the set shown looks exactly like my set except that instead of the CN Cattle Car there was the CN Box Car.  Being now familiar with the history of Rovex, it is quite possible that the same set came with either a cattle car or a box car.  The set also definitely dates from 1971.

I cannot recall where it was bought ... I do remember, though, that it was one of the big department stores in Toronto which had an entire floor dedicated to children's toys.  The store had large display windows with animated Christmas scenes and as the Santa Claus parade took place in the area I am almost certain it was Eaton's Department Store in Toronto.

Why the set number '926' was duplicated is also mystifying.  Set No. 926 was originally a standard issue train set for 1971 and was composed of a CN Diesel Locomotive and three freight cars; these Special Sets have four freight cars.

It may be possible to explain the use of this number by the fact that the Special Set 925 was still being marketed in 1972 (now containing the System 6 Track) and when a new special set was produced the next number in the numerical sequence may have been used in error.  Certain matters appear to have been somewhat chaotic within the company at this time since the decision had already been taken to discontinue the Canadian (now Hornby) product line.

There is an alternative theory: that stocks of the original 1971 Standard Set 926 had been exhausted and, in order to continue to supply customers and to try and stimulate orders in a failing market, it was decided to create and market a new, larger version of the Diesel Freight Set.  This is all conjecture and until further evidence becomes available we will have to wait and wonder in anticipation.

The set appears to be a generic set with either Canadian National or CP Rail contents but it is quite possible that the set's freight car contents may have varied somewhat, dependent on what stock was currently available, or to hand, in the Canadian factory.

The inner tray colour may well have reverted back to yellow in order to match with the UK manufactured Hornby Train Sets which were being marketed in Canada at this time.

This set was originally made for the Australian market in 1971.  It was also available in the UK in limited numbers and was illustrated in the 1972 UK Catalogue; retail price was £9.65.  Although not listed in the catalogue, examples of the set continued to be available in 1973.

The set was never intended for sale in Canada but it appears that a number of sets eventually made their way ‘across the pond’.  Whether these sets were officially available or not is uncertain however this particular set was purchased in Canada in 1972 as a Christmas present.  Perhaps this is yet another example of Louis Marx & Company attempting to offload surplus stock in whatever way possible following their 1971 take-over of the collapsed Lines Brothers empire.