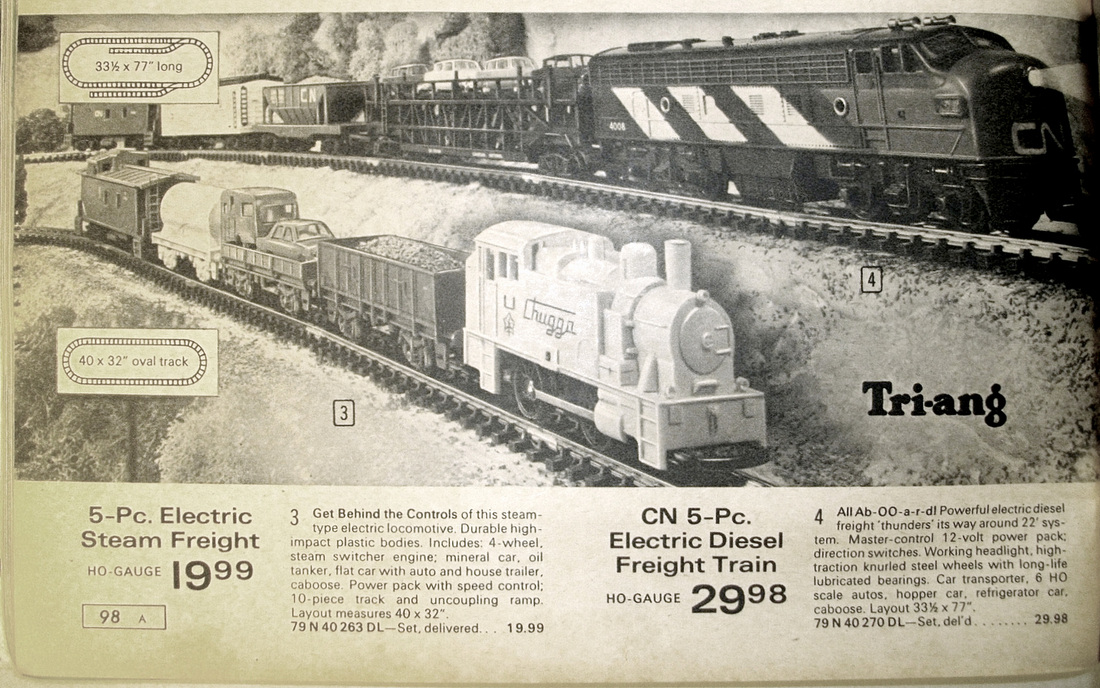 This set has exactly the same Simpsons-Sears 1970 Catalogue reference number as the 1969 issued set.
The difference in the printing of the box lid of this late 1970 version of Set No. 909, to that of the 1969 issued Set No, 908 / 909, is very noticeable.  The box is effectively a 'blank' which was used for any of the sets.  The 'Simpsons and Simpsons-Sears' label which also shows the track layout and the set number is not present.  A few sets have been discovered like this which indicates that it is correct and not an accidental omission.

It seems likely that Simpsons-Sears required further stocks of Set No. 908 / 909 to meet the demand from their customers and requested some additional sets at the last minute.  Therefore an emergency supply of boxes had to be found.  With no available stocks of the correct Simpsons-Sears set labels, it was decided just to rubber hand stamp the number onto the box lids.

Set No. 921 - No information available at present

It is possible to confirm that the following items were included in the set - R.0551 CN Diesel Locomotive, R.115CN orange-red Caboose, Model 1000 Transformer and R.167 Track Pack (containing an oval of Super 4 Track).

What is not known is exactly how many other freight cars were included in the set or what they actually were.
However, it is fairly certain that there would have been two further 'short' freight cars plus, most probably, a 'long' freight car such as the R.3421 CN Car Transporter or a 60ft Flat Car with Containers (such as the R.6631 CN 60ft Flat Car with three 20ft Canadian National Containers).
​These would have fitted very neatly into the box base and only required one or two additional packing inserts at most.
I am very grateful to Grant Vargo for all the photographs and information relating to this set.

Set No. 924 - No information available at present