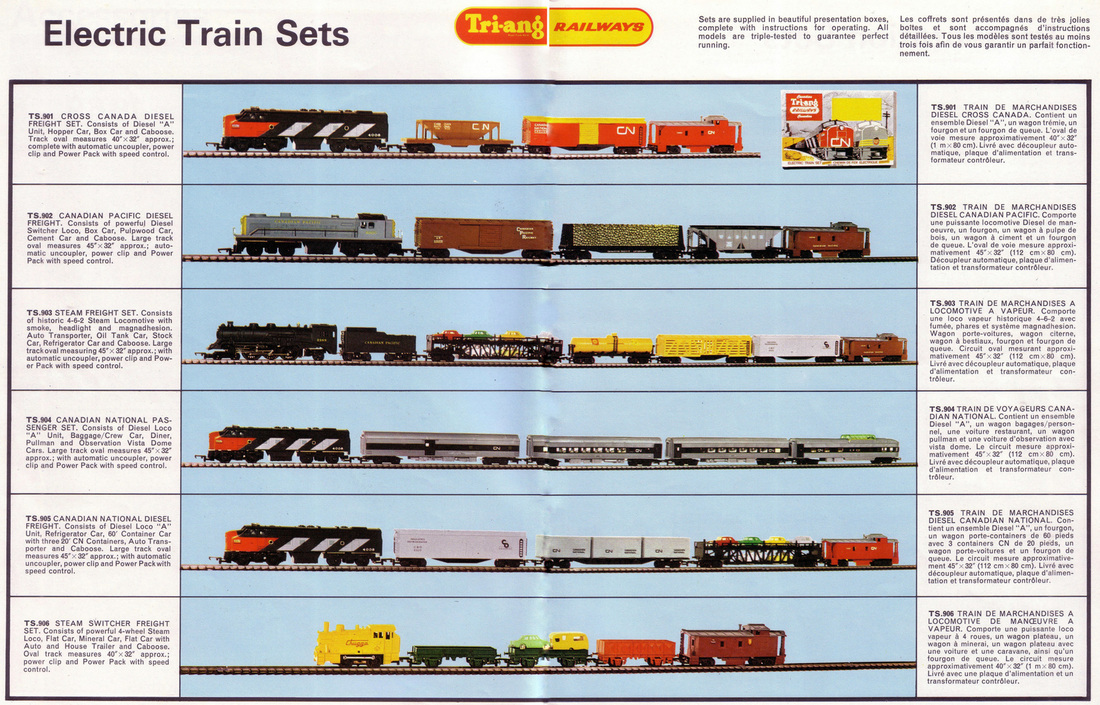 Sets TS.901 to TS.906 as illustrated in the Tri-ang Railways 1969 Canadian Catalogue

The 'TS.' (Train Set) prefixes continued from 1967/1968 and featured in both catalogue and price lists.  The sets continued to be numbered with a three-digit number; but with the first digit ’9’ indicating the year of manufacture.
​It is worth noting that the actual set boxes only ever displayed the three-digit set number; the 'TS.' prefix never featured.

The Presentation Sets had the 'PS.' prefixes dropped and they were now numbered in the standard ‘R.’ numbering system used for virtually for all models.

Unlike the previous four years, where there had been a veritable confusion of names attributed to sets, Tri-ang finally got its act together and there was consistency between the catalogue and price lists.
At the top left, a new style ‘Tri-ang RAILWAYS’ logo, similar to the Tri-ang Hornby logo, is featured with ‘by MECCANO Tri-ang TORONTO CANADA’ printed beneath.

The inscription along the bottom of the box lid reads:
‘ELECTRIC TRAIN SET H.O. SCALE CHEMIN DE FER ÉLECTRIQUE ÉCHELLE H.O.’ and beneath that ‘by MECCANO Tri-ang, TORONTO, CANADA’.

The four sides of the box lid were decorated with a total of fourteen illustrations from the 1969 catalogue.

As with the 1968 produced sets, each set had its own individual vacuum-formed yellow styrene tray to hold the locomotive and rolling stock.  The set numbers were now impressed into the moulding at the bottom right- hand corner for easier identification by the packing staff when assembling the various sets.

The Model 2200 Transformer, with its white card packing piece, and the R.167, or R.167A, Track Pack were then placed side by side in the remaining box space.

On final packaging, the base tray and contents were shrink-wrapped for safety, with the box lid being left removable, so that the contents could be easily viewed or displayed in retail outlets.

Availability of the 1969 Sets

The Sets and Presentation Sets were un-priced in the February 24, Retail Price List and, at that time, clearly unavailable.

The later R. G. Hornby Co. (Roland G. Hornby) Retail Price List and Order Form dated May 1, 1969 helps to clarify the situation regarding set availability:
Set TS.901 Cross Canada Diesel Freight was not available whilst the remainder of the sets, TS.902 through to TS.906 have list prices quoted and were now available to be ordered.

​Looking carefully at the production and shipping dates for the new models included in some of the sets, it has become apparent that it would have been impossible to have made these sets available until at least May of 1969.  This was slightly earlier than was traditional; when sets tended to be assembled in June for release in August in preparation for the Christmas market.

Set availability would have continued well into 1970 before being withdrawn in favour of the newly announced 1970 Sets.

Seven new train sets were featured in the catalogue; which were mainly re-workings of earlier sets. In fact, only two of the sets actually required a new pre-formed inner tray to be manufactured.

In addition, two Presentation Sets, R.467 and R.469, continued into the catalogue from the 1969 range but no new presentation sets were introduced and these were discontinued as stocks dwindled.

Availability of the 1970 Sets

As with the situation concerning the availability of the 1969 Sets, which would have been available from about August/September 1969 and continued to be available into 1970, a similar situation occurred for the sets announced in the 1970 Canadian Catalogue.

The 1970 Sets were un-priced in the February 22, Retail Price List. Again, looking carefully at the production and shipping dates for the new models included in some of the sets, it is apparent that it would have not been possible to have made these sets available until at least the second-half of 1970; this was traditionally August/September, for the Christmas market, as was the practice in previous years.

For example, to quote Pat Hammond in his ‘Story of Rovex Volume 2’, the CP Rail coaches ‘arrived in May 1970’. The CP Rail Car Transporter also ‘dated from May 1970’ as did the red CP Rail Box Car, and there were more examples.

Therefore, set availability would, probably, have been from August/September 1970, continuing into 1971 before some sets were withdrawn in favour of the newly announced 1971 Sets, when they eventually became available.