These sets were not illustrated in the 1967/1968 Canadian Catalogue but were numbered - with no set names, description or price - in the Feb. 26, 1968 Tri-ang Railways/Meccano Tri-ang Price List.  The sets were not listed in the May 1, 1968 Roland G. Hornby Price List. 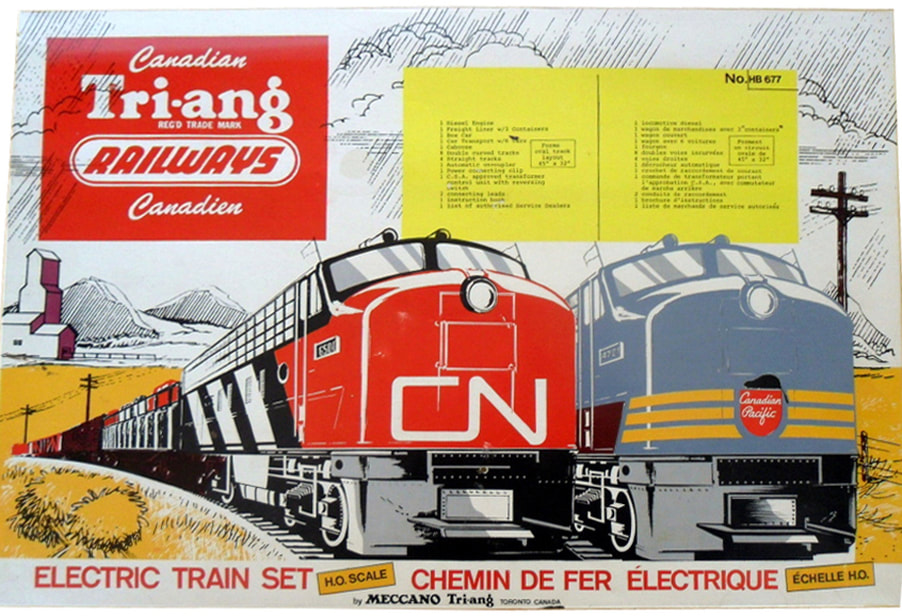 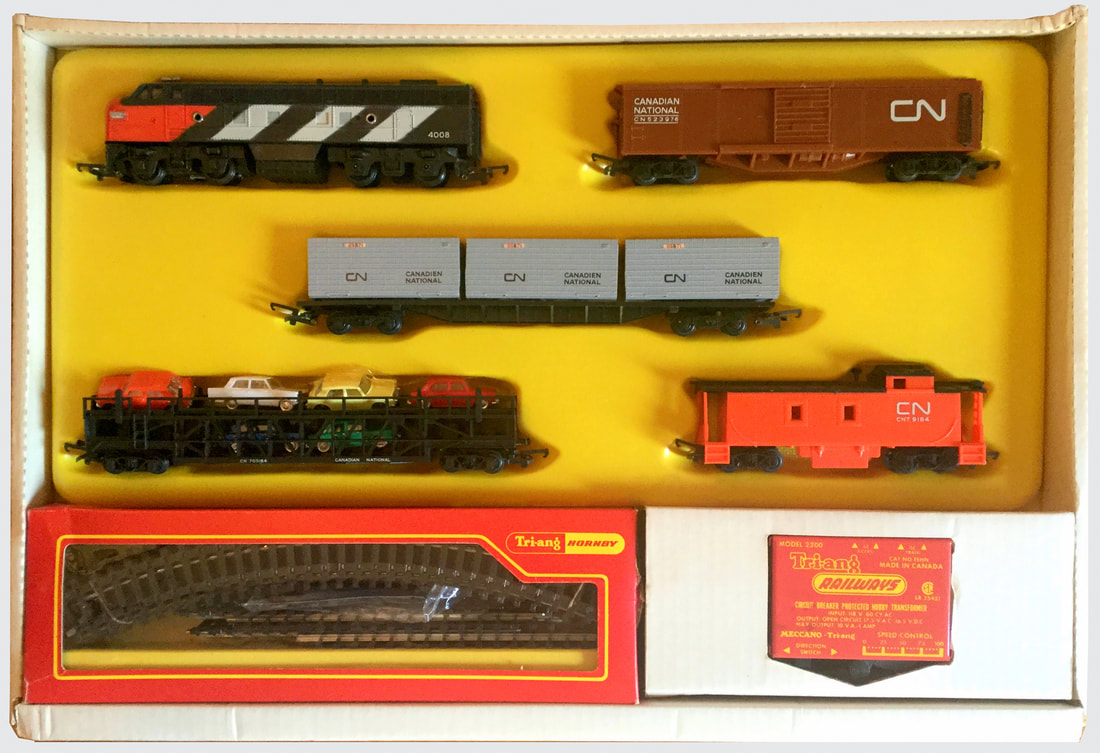 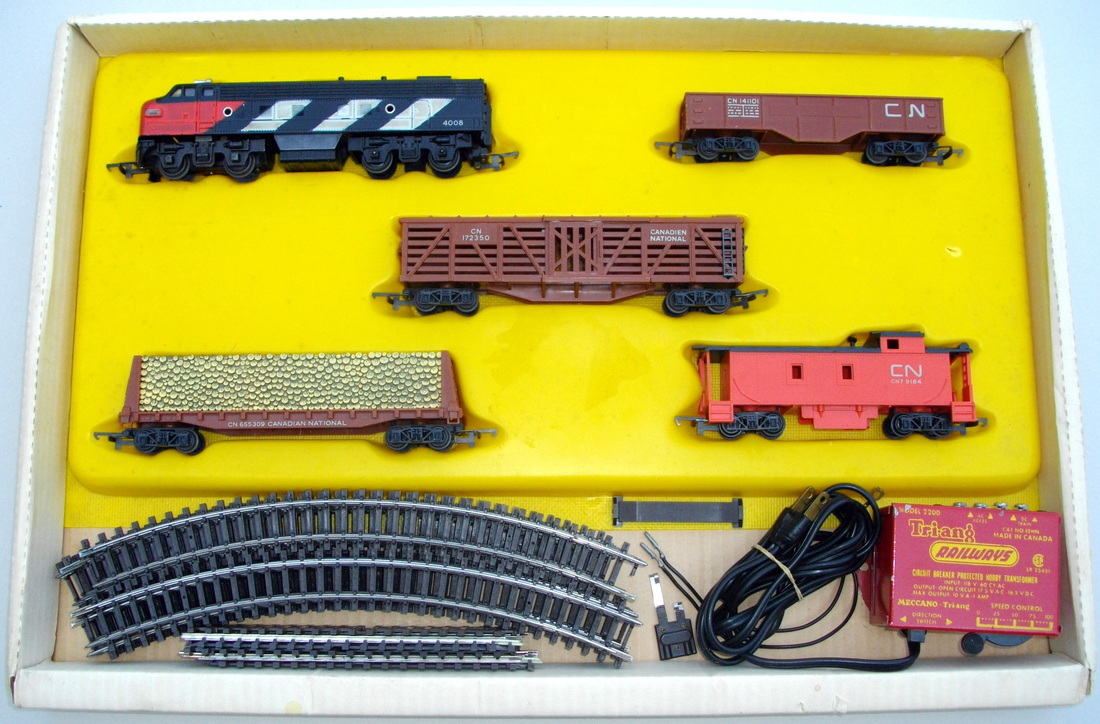 Set No. AT 678 contents (photo: Terry Walker)
Set AT 678 - possible origins
From discussions with Canadian colleagues, there appear to be very few toy stores in Canada in the 1960’s and 1970’s that began with the letter ‘A’ and the only one that can be traced with the initials 'AT' is Alexander Toyland of Rosemere Shopping Centre, Rosemere, Quebec which was an Official Tri-ang Hornby Service Dealer in the middle to late 1960's.  It is questionable whether such an enterprise could handle the volume of train sets that would justify an order of several hundred of the same set from Lines Bros.  It seems more likely that, to handle such a large quantity of sets, a company with a large distribution network would have been necessary: such as a chain of department stores, a home-shopping catalogue or a distributor of model railways.

ATT first started around May 1967, they were very ambitious and wanted to expand their client base very quickly, they ordered and sold Tri-ang products from the outset and I would suggest that it is just, but only just, possible that they commissioned a Canadian Special Set to test the prospective Canadian market for their products. They might have probably offered these sets to the smaller hobby retail outlets in Canada rather than the large department store chains. But, it is only a theory! 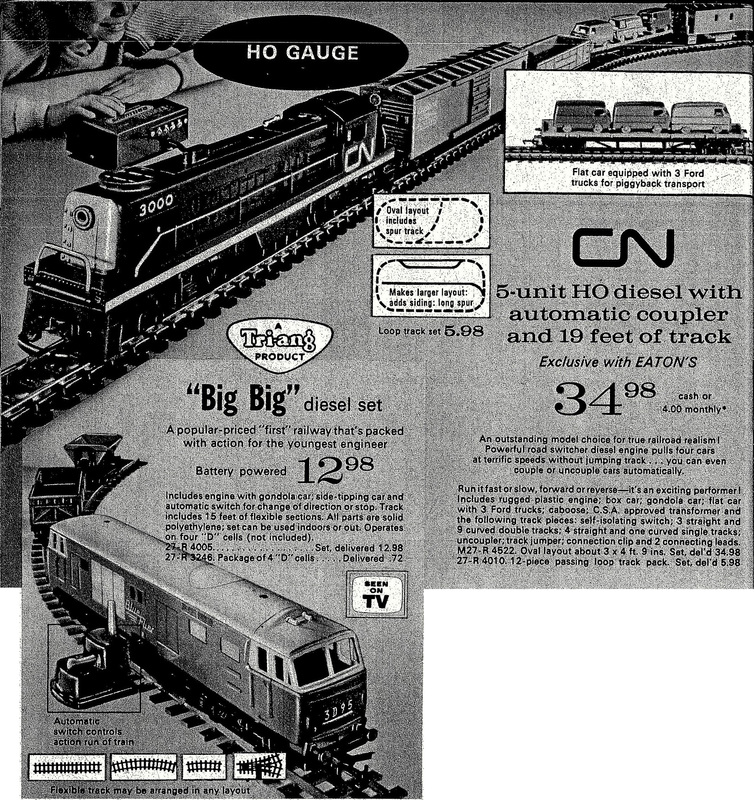 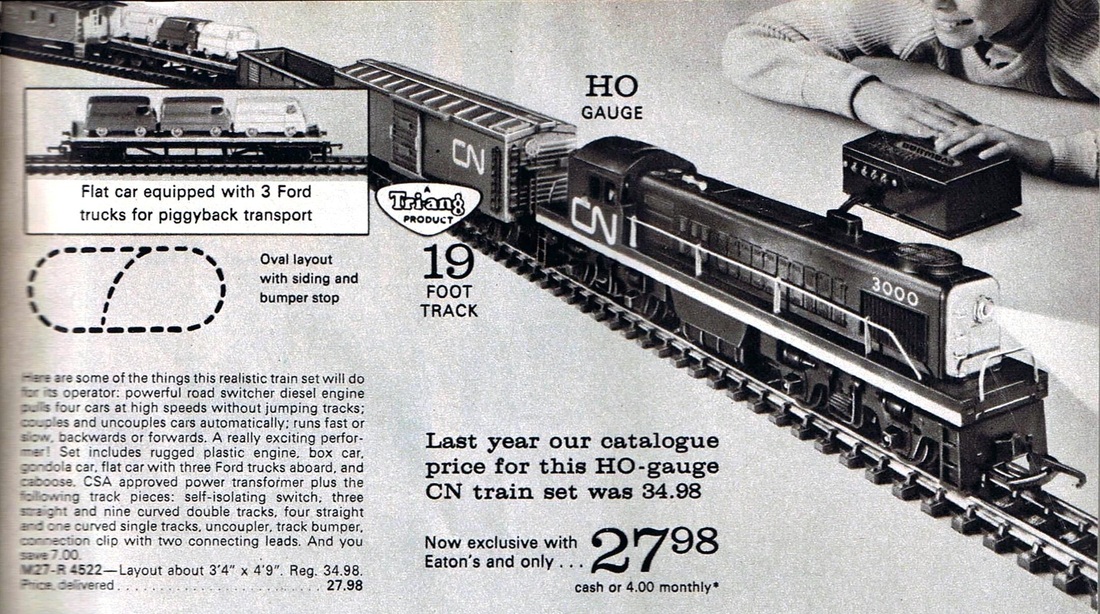 CN Diesel Freight Set from the 1968 Simpsons-Sears Christmas Catalogue (photo: Terry Waker - used with the kind permission of Sears Canada Inc.)
Note the dual set number which was for Simpsons-Sears ordering purposes.  It is believed that catalogue sales and retail store sales were handled by different departments within the company.
The set number 'SS 680 MO' was allocated to the Simpsons-Sears Mail Order (home shopping) Christmas Catalogue sales
whereas the set number 'SS 680' was allocated to their retail store outlet sales.
The set was composed of the R.55 CN Diesel Locomotive, R.342 CN Car Transporter, R.111 CN Hopper Car, R.129 CN Refrigerator Car and R.115 CN Caboose, Model 2200 Transformer and a large oval of Super 4 Track to include a passing loop and a siding. The track included with this set would appear to be that of the R.681 Track Layout Pack (and, perhaps, not as illustrated in the Simpsons-Sears Catalogue).  The retail price was $29.95 Canadian.

Set No. AM 681 contents printed on box lid (photo: Jeff Gouin)
The following 'Dockside Switcher Freight Set' has survived but without it's set box lid.  So, it is not currently possible to know the correct set number to attribute to this set or for whom it was made.  It now seems most likely that it was issued in 1968.

No details of any further 1967 and 1968 Special Train Sets have currently been recorded.  Although, it would be reasonable to surmise that sets may well have been produced for other department store chains such as Woodward's; details of which have yet to be discovered.
This continues to be a work-in-progress and any further information or pictures would be most gratefully received.
1969-1970 Sets