A few genuine examples of the CP Rail Pulpwood Car with black end retainers are known to exist.  The models were 'made up' in the Canadian warehouse from incomplete and surplus parts in order to clear remainder stock.
This example was sold in a Canadian 'Bubble Pack' and, more than likely, dates from the last days of production.

(photo: Richard Burt)
Peter Zimmermann of Vintage Toy Oasis remembers these 'multi-coloured Pulpwood Cars well.  In correspondence with me he noted,
"I had a job lot quantity of these multi-coloured Pulpwood Cars, all mint-boxed, come through my hands in the late 1980s.  They were the orangey-red CP Rail version but with black end braces; and of course I still have one."

It would appear that surplus stocks of these models were sold-off after the Louis Marx owned Canadian Hornby Railways company ceased trading in 1974.
​But, around 1980 a large stock of Canadian Freight Cars and other models was discovered in Canada and offered for sale locally.
George's Trains Limited of Toronto are known to have purchased large stocks of many remaining models as well as a myriad of spare parts from the warehouse.

Just a sample of the colour variations of the Pulpwood loads ... 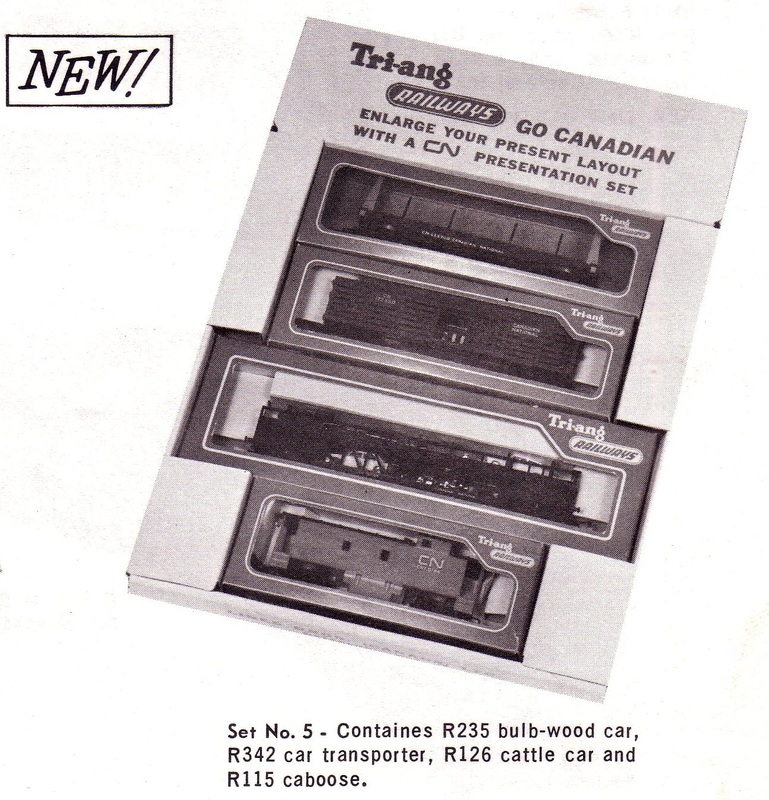 from the 1966 Canadian Catalogue Insert 2nd Issue
If you take a careful look at the 1966 Catalogue Inserts, the salmon-coloured first issue describes the brown Canadian National Pulpwood Car as a
so-called 'R235 bulb-nosed car' whilst the second issue, on white paper, has its description amended to a 'R235 bulb-wood car'.

Upon closer examination, the actual model illustrated in the box has been 'constructed' from the brown R.234CN Canadian National Flat Car with 8 metal stanchions and two grey bulkheads from the earlier Transcontinental version of the Pulpwood Car... and there is not a log load to be seen !